Do you need help in another language? We will get you a free interpreter. Call 808-587-0800 to tell us which language you speak.

21-01, Audit of the Agribusiness Development Corporation 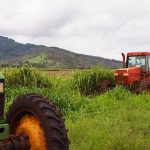 Photo: Office of the Auditor

THE HAWAI‘I STATE LEGISLATURE created the Agribusiness Development Corporation (ADC) in 1994 amidst a series of sugar and pineapple plantation closures that lawmakers viewed as “an unprecedented opportunity for the conversion of agriculture into a dynamic growth industry.” Projecting that the downsizing of sugar and pineapple production would free up 75,000 acres of agricultural land and 50 million gallons of water daily over the next decade, the Legislature established ADC as a public corporation tasked with developing an “aggressive and dynamic” agribusiness development program to convert former plantation assets for use by new large-scale commercial enterprises producing the majority of their crops for export.

We found that ADC has done little – if anything – to facilitate the development of agricultural enterprises to replace the economic loss created by the demise of the sugar and pineapple industries. After almost 30 years, ADC has yet to develop an agribusiness plan – a plan required by statute – to define and establish goals, objectives, policies, and priority guidelines for its agribusiness development strategy or other short- and long-range strategic plans.

Instead of leading the State’s agricultural transformation, ADC primarily manages 4,257 acres of land it started acquiring in 2012 at the direction of the Legislature as well as the Waiāhole Water System on O‘ahu. Yet, we found that the corporation struggles to manage its lands, challenged by the myriad duties required for effective land management. For instance, a preferred anchor tenant had occupied ADC land for years without a formal, written agreement. We saw evidence of the tenant’s farming activity during an October 2019 site visit, roughly two weeks before ADC finally executed a license agreement with terms retroactive to 2016. That tenant also had provided services in exchange for rent credits, building reservoirs and paving roads used by other ADC tenants. But, ADC did not follow the state procurement process when authorizing the work nor did it document, monitor, or track the services, labor, or materials the tenant provided. In fact, the Executive Director acknowledged that ADC had opted to take the tenant’s “word” on the services provided, the costs incurred, and the materials used.

Finally, we found that ADC’s Board of Directors, as the head of the corporation, has provided minimal guidance and oversight of ADC’s operations. Rather than taking an active role in developing agribusiness policies, establishing short- and long-term strategic plans, and charting the corporation’s direction, the Chairperson and Vice-Chairperson believe that the Board’s responsibility is to address whatever business is brought before it by the Executive Director. And, as a result of the Board’s abdication of its policy-making and oversight responsibilities, ADC has yet to provide the necessary leadership to facilitate the transition of agricultural lands and infrastructure from plantation operations into other agricultural enterprises that it was intended to provide after almost 30 years since its creation.

Why did these problems occur?

ADC – both its Board of Directors and its staff – does not understand the corporation’s overarching purpose, a mission that has remained unchanged since its creation in 1994 and is clearly stated in statute: ADC was established “as a public corporation to administer an aggressive and dynamic agribusiness development program” to replace the economic loss caused by the closure of Hawai‘i’s sugar and pineapple plantations. The Legislature intended the corporation “to facilitate the transition of agricultural infrastructure from plantation operations into other agricultural enterprises, to carry on the marketing analysis to direct agricultural industry evolution, and to provide leadership for the development, financing, improvement, or enhancement of agricultural enterprises.” And, ADC was granted powers and exemptions unique in Hawai‘i state government that afford the corporation unrivaled flexibility to bring former plantation lands back into production “in a timely manner.” However, as with its primary statutory mission, the corporation is generally unaware of those powers and how they can be used to develop a diversified agriculture industry for Hawai‘i.

ADC has failed to prepare a Hawai‘i agribusiness plan – which is required under Chapter 163D, Hawai‘i Revised Statutes – that would define and establish the goals, objectives, policies, and priority guidelines for the corporation’s agribusiness development strategy. The Executive Director thinks such a plan is unnecessary: “I have everything up here,” he said, pointing to his head. In lieu of a written strategic plan, short-term or long-term, ADC gave us a “project matrix” that looked like a to-do list of 85 tasks ranging from lawn mowing to acquiring property.

Limited participation from ADC’s Board of Directors compounds the corporation’s challenges. Board members receive no orientation or training and offer ADC’s management and staff little meaningful oversight or direction, primarily considering matters that the Executive Director chooses to bring before them or getting involved in day-to-day staff-level work. The Board has not set goals or performance measures for the Executive Director to fulfill and has not held him accountable for neglecting statutory requirements such as preparing the agribusiness plan or conducting market research.

We had difficulty pinpointing exactly why ADC struggles with managing the lands it has acquired since 2012, in part because the corporation’s recordkeeping and filing system are in disarray. Documents were piled under desks and kept wherever space allowed. Staff hastily assembled tenant files after we requested them, but the files they provided were disorganized and often missing important documents, such as board approvals, license agreements, and proof of insurance. When we requested documents we believed would be essential to the day-to-day operations of a corporation that manages land and properties – such things as land management policies, land acquisition guidelines, inventories of land holdings, tenant listings, and rent rolls – we were informed that the requested materials did not exist and would need to be assembled. ADC could not provide us with even baseline metrics of its land holdings and its management of those resources because they do not collect, track, and document such data. We had to create our own inventory of ADC’s lands and licenses issued for portions of larger parcels during the audit.

ADC also has not developed documented policies and procedures to guide its operations, which precluded us from assessing which, if any, part of a process may have failed. When we asked to review the corporation’s acquisition process, staff came up with a 10-step process on the spot, although, in practice, each of ADC’s purchases has been directed by the Legislature. The Executive Director told us that documented guidance would be “good to have” but he does not want to “get stuck with something in writing.” But operating without documentation, a formal plan or strategy, or board oversight, has resulted in a corporation that lacks a clear sense of direction and accountability.

Why do these problems matter?

The Legislature recognized the demise of Hawai‘i’s sugar and pineapple industry would create a significant loss to the state economy and had the foresight to identify the need for “aggressive and dynamic leadership” to develop an agricultural industry to fill that economic void. ADC was created to provide that leadership, to facilitate the development of Hawai‘i-based agricultural enterprises whose products are primarily for export, and to assist Hawai‘i-based agricultural enterprises with marketing and promotional strategies to exploit local, national, and international markets. ADC has not become the entity the Legislature envisioned – one that would develop an agriculture industry to stand as a pillar of the state economy, alongside tourism and the military. After nearly 30 years, the economic void created when plantations ceased production remains mostly unfilled.

The current pandemic has highlighted the necessity of having a diverse and well-balanced economy during difficult times. The spread of COVID-19 caused the State to restrict travel to Hawai‘i, virtually shuttering the tourism industry and disrupting the State’s economy. Large-scale agricultural enterprises whose crop productions are primarily for export would likely have lessened the economic blow while providing the State with greater food self-sustainability. The high cost the State has paid for ADC’s past inaction and its continued lack of direction, focus, and competence is immeasurable; the missed opportunities are unknowable. However, what is clear is that the State can no longer wait for ADC to figure out what it is, what it is supposed to do, and how it is supposed to do it.